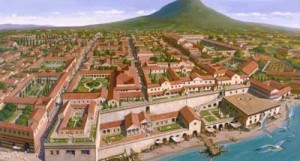 Visual representation of Herculaneum before the eruption of Mt. Vesuvius.

Pompeii was a resort town in the Roman Empire, located south of Naples on the west coast of Italy. The ports were not only used by the Roman Empire but foreign lands used them as well. It contained many shops, different services, and many wealthy Romans had vacation homes there. At it’s height, Pompeii had a population of 20,000 (Luke, 2013:1).

Herculaneum was originally a Greek trading post that was later controlled by Samnites, and eventually the Roman Empire. At the time of eruption, archaeological sources estimate that about 5000 people lived in Herculaneum (Capasso, 1999).

In 62 A.D., a devastating earthquake struck the towns of Pompeii and Herculaneum that was found through the analysis of written sources. This earthquake caused considerable damage to the town and a high mortality rate (Capasso, 1999). It is important to know because repairs were not finished by the time of the eruption, making it difficult, if not impossible, to identify which damages were directly associated with which disaster.

Next: Eruption of Mount Vesuvius of 79 AD