On August 24th, 79 AD, Mount Vesuvius awoke, a volcano once thought to be extinct erupted covering the surrounding cities and those that remained in it with pumice, ash and debris (Cameron, 2006). A rich description of the Mount Vesuvius eruption day events has been discovered through the archaeological evidence and the use of written letters of an eyewitness. Pliny the Younger wrote letters to Tacitus the senator and historian describing what he saw the day of the eruption (Capasso, 1998). If you wish to read the translated letters of Pliny the Younger to Tacitus, click here or click on the tab in the menus bar under Eruption of Mount Vesuvius of 79 AD.

An easy way to understand the events on the eruption day is to do so in a chronological order, using the initial eruption and the seven following pyroclastic surges at pivotal points in where destruction escalated to the surrounding cities.

Initial Eruption – According to Pliny, the eruption began around 2 or 3 PM. However, according to archaeological evidence, we now know that the eruption occurred closer to 1 PM. The eruption caused the sky of the surrounding cities to fill with ash, pumice

Pumice is a volcanic stone that is porous and spongy.

and debris (Cameron, 2006). Inhabitants in both the cities of Pompeii and Herculaneum began to evacuate. The citizens were described as being worried but not frantic (Capasso, 2001). Some individuals in Pompeii were described as having pillows tied to their heads to avoid being hit by falling pumice (Luke, 2013: 1-2). The majority of citizens left but there were those who chose to remain in the area and seek shelter, which would prove to be a fatal mistake. 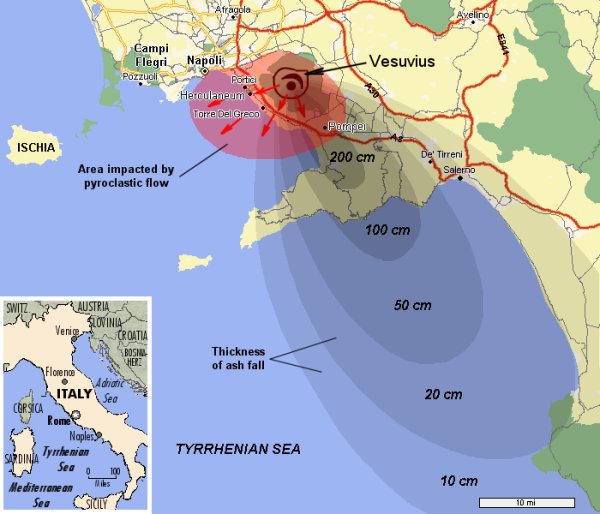 First & Second – The first and second surge struck Herculaneum 12 hours after the initial eruption. On August 25 at approximately 1 AM, the volcano column collapsed causing the first surge sending extremely hot ash, gas, and rock towards Herculaneum. Burning cloud rushed through the town of Herculaneum killing all life instantly (Capasso, 2001). The cloud gained speed when it reached the cliff to the beach, killing the people hidden inside waterfront shelters. The cloud was estimated to be at the speed of 50 mph and a temperature of 500°C (Mastrolorenzo, 2001)

Third – This surge headed down the southeast side of the volcano towards Pompeii but only reached the walls.

Fourth – This is the surge that reached Pompeii and wiped out Pompeii causing massive destruction and death to any living thing still in the vicinity.

Fifth & Sixth – These were the most powerful surges, falling just short of reaching the town of Misenum.

By 8 AM, Pompeii, Herculaneum, and the surrounding countryside were covered in ash. The major cause of death was pyroclastic surges (causing asphyxiation and thermal shock) and falling pumice (Luke, 2013: 1-2).

This Video is a digital animation of the eruption of Mt. Vesuvius in 79 AD from Pompeii perspective.

Please check out the Interactive Eruption of presented National Geography for a fun visual learning experience.